Marine slaying suspect to be returned from Mexico 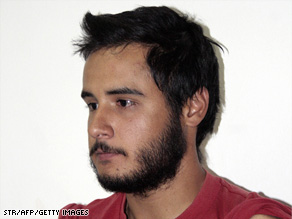 U.S. Marine Cpl. Cesar Laurean, 21, who was arrested in Mexico in April, could be returned to Onslow County, North Carolina, within a week, the county sheriff's office said in a statement issued Thursday. Federal authorities will handle his transportation to the North Carolina jail.

Laurean has been indicted on first-degree murder and other charges in the death of Marine Lance Cpl. Maria Lauterbach. Her charred body and that of her fetus were found beneath a fire pit in Laurean's backyard near Camp Lejeune, where both were stationed, in January, a month after she was last seen.

Prosecutors allege that Laurean killed Lauterbach on December 14 and used her ATM card 10 days later before fleeing to Mexico to avoid prosecution.

Laurean was arrested in April in San Juan Vina, in the Mexican state of Michoacan. Because he holds citizenship in the United States and Mexico, he could not be immediately deported and had to go through the extradition process, authorities said.

Asked by a Mexican reporter at the time of his arrest whether he killed Lauterbach, Laurean said, "I loved her."

As part of the effort to apprehend Laurean, authorities seized a computer belonging to his sister-in-law that Laurean's wife, Christina, was using to communicate with him, a law enforcement official had said.

If convicted, Onslow County prosecutors said, Laurean would face a maximum sentence of life in prison without parole. Mexico's extradition policy prohibits U.S. authorities from seeking the death penalty against fugitives it hands over.

Authorities found Lauterbach's body after Christina Laurean produced a note her husband had written claiming that the 20-year-old woman slit her own throat during an argument, according to officials.

Although a gaping 4-inch wound was found on the left side of Lauterbach's neck, autopsy results indicate that the wound itself would not have been fatal.

Prosecutors have said there was no evidence that Christina Laurean was involved in or aware of Lauterbach's slaying before she gave the note to authorities.

Lauterbach had accused Laurean of raping her, and it is unclear whether he was the father of her fetus, although her relatives have said they believe him to be. He had denied the rape allegation and said he had had no sexual contact with her.

Mary Lauterbach, the young woman's mother, has said she's unconvinced that the Marine Corps took her daughter's rape allegation and other allegations of "harassment" seriously. Her daughter's car was keyed, she said, and she was assaulted.

"Those particular actions should have been taken much more seriously because the Marines were aware of them," she said Friday.

In a statement issued after her death, the Marine Corps said Laurean's denial "was believed to be significant evidence."