Inside a raid: Going 95 mph to nab sex offender

Editor's note: The U.S. Marshals Service last week launched one of the largest weeklong fugitive sweeps in the southeastern United States. CNN takes you inside the operation. 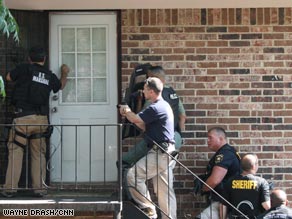 Authorities received a tip that a convicted child molester was living here. He was captured at a hardware store.

ATLANTA, Georgia (CNN) -- The trail for the convicted child molester seemed to grow cold as the police combed his empty apartment.

James Maurice Robinson, 25, a confessed sex offender, had been on the run for more than two years, and it looked as if he would elude capture yet again.

The authorities huddled in a nearby parking lot to discuss Plan B, an air of disgust hanging over them. James Ergas, the U.S. Marshal helping to lead this operation, acts on a tip. He pulls out his cell phone and calls a hardware store where the suspect may be working.

Using a ruse, he begins speaking to the manager and, at one point, Robinson himself gets on the phone and unknowingly talks to the very man trying to catch him.

Gotcha! Authorities now know exactly where their man is. He's seven miles away, on the other side of town. It's 11:02 a.m.

Ergas guns his unmarked sport utility vehicle at 95 miles per hour through downtown Atlanta, zipping in and out of the city's notorious traffic congestion.

"I've got no place in my heart for pedophiles," he says, pressing down harder on the gas. The vehicle thrusts forward.

Ten minutes later, he whips his SUV into the store's parking lot. The suspect's car, a burgundy, four-door Pontiac Grand Am, sits near a back stairwell.

"When we go in there, he's going to run out the back," Ergas says.

He parks near the front of the building and alerts his backup. Within minutes, the full team arrives. Two take position near the back stairwell. Ergas and other team members, dressed in black flak jackets, enter the front door at 11:19 a.m.

Robinson doesn't have a chance. He tries to run, but slips. Ergas points his Taser and prepares to zap him. Robinson knows his gig is up. He surrenders peacefully.

"He saw the Taser," Ergas says, with a smile. "Nobody wants to be Tased."

More than 100 miles away, the man who first arrested Robinson in March 2004 gets word of the capture.

"Anytime we can get a pervert off the street like that, it's going to make me happy," said Robert Tate, a detective with the LaFayette Police Department in northwest Georgia, near the Tennessee border.

Robinson pleaded guilty to one count of child molestation on May 26, 2005, according to the Walker County District Attorney's Office. But he skipped town and never made his sentencing hearing on February 14, 2006, authorities said. A warrant was then issued for his arrest. Robinson now faces five to 20 years in prison, the DA's office said.

Robinson was one of 1,250 fugitives busted in Georgia last week as part of Operation Falcon, a nationwide sweep to arrest some of the most violent offenders. Of the arrests in Georgia, 724 came in metro Atlanta; two were suspected killers, authorities said.

Multiple sweeps like these have already taken place in other cities in recent weeks as part of Falcon. More are coming to undisclosed regions of the country. Authorities would not release further details about the nationwide hunt due to the ongoing nature of the operation.

"Our primary focus when we do this operation are violent offenders, sex offenders and gang members," says Keith Booker, the commander of the U.S. Marshals Southeast Regional Fugitive Task Force leading this sweep that included 115 federal, state and local agencies.

The fugitives were wanted on felony charges ranging from murder and aggravated assault to rape and armed robbery to child molestation and an array of parole violations.

On this day, while Ergas and his eight- to 10-member team hit multiple spots where fugitives were believed to be living, another 150 agents, investigators, detectives, officers and deputies were working other parts of metro Atlanta.

Of the 700-plus arrests made around Atlanta, authorities smashed through 154 doors. Not every suspect was captured, but the hunt generated leads that will be followed up.

The work involved grueling and dangerous 14- to 18-hour days, but the officers still found time to laugh. There was one who Tasered himself while running after a suspect, and another who held up a bag of oregano thinking it was pot and quizzed his subjects. Both provided fodder for the watercooler.

Then, there was the suspect wanted for aggravated assault who authorities said tried to jump over a 30-foot wall, breaking several bones when he landed.

"He didn't want to go to jail. Instead, he went to jail crippled," Ergas said.

The police kept close tabs on the six different teams' arrests, an internal competition to see who could bag more wanted felons. Team Vulture beat out Team Osprey with 147 arrests to 132.

At the end of the operation, about 80 officers crowded into a large conference room and were briefed on the final results. "You prevented a lot of victims this week," Booker told them.

Law enforcement studies, he said, indicate the typical fugitive commits an average of 13 crimes while they're on the run. If that's true, more than 15,000 potential victims have been spared.

"These people can't commit crimes against other people while they're locked up," Booker said.

All About U.S. Marshals Service • Crime