(CNN) -- Yahoo! announced Monday that the search is on for the Internet giant's next CEO. 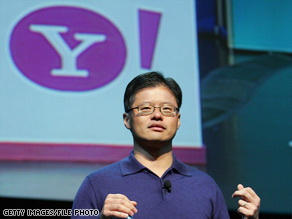 The new CEO will replace Yahoo! co-founder, Jerry Yang, who assumed the position in June 2007 and has since come under fire for failing to turn around the company.

Yang will step down when a replacement is selected.

Just two weeks ago at the Web 2.0 Summit, Yang was asked if he was the right guy to lead the battered portal.

Yang dodged the question by defending his passion for the company he co-founded 13 years ago.

"I didn't make the decision of being the CEO lightly," he said. "I wanted to make a change at Yahoo! that I believe I can make ... That's a dream that I felt I could achieve by being CEO and that's still the dream today."

Now, Yang plans to return to his former role as "Chief Yahoo" and will still have a seat on the board, Yahoo! said.

During his short tenure, Yahoo! has had two major rounds of layoffs and has seen its search market share shrink significantly while a series of reorganizations led to the departure of senior executives.

Wall Street and shareholders criticized Yang for falling short of reaching an agreement to sell the company to Microsoft.

Yang also was taken to task when Google pulled out of a controversial ad agreement earlier this month that would have boosted Yahoo's revenues by hundreds of millions of dollars.

Yahoo! said the search for a new CEO will encompass both internal and external candidates.

"Over the past year and a half, despite extraordinary challenges and distractions, Jerry Yang has led the repositioning of Yahoo! on an open platform model as well as the improved alignment of costs and revenues," said Chairman Roy Bostock.

"Jerry and the Board have had an ongoing dialogue about succession timing, and we all agree that now is the right time to make the transition to a new CEO who can take the company to the next level."