UK to clamp down on Internet piracy

(CNN) -- Britain's leading online service providers are Thursday expected to join a government--backed scheme to tackle the illegal downloading of music and films, despite concerns it could curb the freedoms of Internet users. 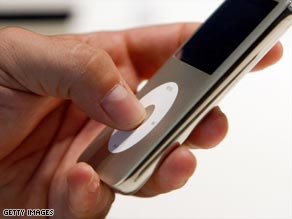 The record industry has long grappled with how to wrest back control of digital music.

The scheme is aimed at an estimated 6.5 million Britons who have downloaded files illegally over the past year, a practice the music industry says could cost it $2 billion over the next five years, according to the UK Press Association.

Under the new measures, the most prolific downloaders will be sent letters to inform them that their activity has been detected and is being monitored. Further measures will reportedly see their Internet access restricted.

The six Internet providers behind the scheme -- BT, Virgin Media , Orange, Tiscali, BSkyB and Carphone Warehouse -- are understood to have committed themselves to developing legal file-sharing services, PA reported.

According to the London Times newspaper, those who download illegally and ignore warnings could be subject to online surveillance and have their Internet speeds restricted to prevent them swapping large files.

"This is something of a step into the unknown for the Internet providers, music industries and minister," former pop star Fergal Sharkey, who now heads musicians' body British Music Rights, told the Times.

"But we can't go on without it -- no business can survive after losing as much revenue as the music industry had."

The move has, however, generated concern among liberties campaigners who say the measures could unfairly target innocent Internet users, such as parents unaware their children are using their connection for downloads.

Musician Billy Bragg told the British Broadcasting Corporation that the music industry was in danger of alienating its audiences through the measure and should look at other ways of safeguarding revenue.

The scale of illegal downloading was highlighted in a recent survey by Britain's University of Hertfordshire which claimed most iPods or MP3 digital music players contained more than 800 illegally copied songs.

Users copy files illegally by downloading software from the Internet to gain access to a file-sharing network.

When the software is in use, and the user's connection to the is open, the "file-sharer" can trade music files (by uploading or downloading) with others who are online.

All About Virgin Media Inc. • Internet