(CNN) -- A Paris court has ordered eBay to pay $63 million damages to luxury goods company LVMH for allowing copies of its goods to be sold on the Web auction site. 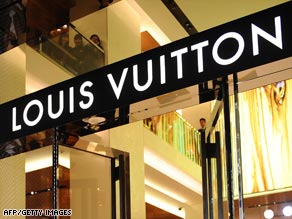 The fashion company -- home to brands including Louis Vuitton, Givenchy, Fendi, Emilio Pucci and Marc Jacobs -- complained it had been hurt by the sale of fake products on eBay.

Pierre Godet, an adviser to LVMH Chairman and CEO Bernard Arnault, said the court's decision was "an answer to a particularly serious question, on whether the Internet is a free-for-all for the most hateful, parasitic practices."

eBay said LVMH was trying to crack down on Internet auctions because it was uncomfortable with its business model, which puts sellers rather than brands in control.

"If counterfeits appear on our site, we take them down swiftly," eBay spokeswoman Sravanthi Agrawal said.

"But today's ruling is not about counterfeits. Today's ruling is about an attempt by LVMH to protect uncompetitive commercial practices at the expense of consumer choice and the livelihood of law-abiding sellers that eBay empowers every day."

She said eBay intended to appeal the ruling.

The case pit two pillars of their industries -- one old, one new -- in a country whose courts often challenge Internet companies on matters protected elsewhere by freedom of speech.

The ruling faulted eBay for "guilty negligence" for not doing enough to prevent fake goods from being sold on its site.

The court also ruled that eBay was responsible for the "illicit sale" of perfumes from the LVMH empire, which can be sold only through the brands' "selective distribution networks."

The court barred eBay from running ads for the perfume and cosmetic brands or face a fine of $79,000 per day.

Heather McDonald, partner at law firm Baker Hostetler, said: "eBay has policies and procedures in place where they will intervene in an action between a buyer and seller if there's a problem, and they profit directly on the basis of every item that is sold on their Web site.

"This gives them an affirmative obligation to take steps to make sure that illegal goods aren't sold, and they certainly have the ability to do that.

"They have the ability to do this, they have just chosen not do and to rest the entire burden of policing eBay on the shoulders of the trademark and copyright holders whose rights are being infringed here."