UNITED NATIONS (CNN) -- U.N. Secretary-General Ban Ki-moon has called for the "immediate and unconditional release" of the head of the World Food Program's Mogadishu office after his arrest, a spokesman said. 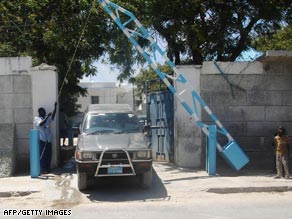 A vehicle leaves the United Nations compound in Mogadishu on Wednesday.

Up to 60 "heavily armed and uniformed" Somali troops stormed the WFP office Wednesday morning and seized Idris Osman at gunpoint, but no shots were fired, the agency reported. Osman was being held at the headquarters of Somalia's National Security Service in Mogadishu, and WFP officials were working to gain his release, the agency said.

The aid agency has received no explanation for his arrest, which Ban's office called a violation of international law, WFP spokesman Marcus Pryer said.

Somalia has relied heavily on international aid since 1991, when the collapse of its government spawned a decade and a half of civil war. Monday marked the WFP's first food distribution to mosques throughout violence-wracked Mogadishu in nearly four months, but the effort was halted immediately after Osman's arrest "in view of WFP's duty to safeguard its staff," the agency said.

The U.N.-backed transitional government took power in Mogadishu last December after an Ethiopian-led invasion drove out the Islamic Courts Union, which had seized power from U.S.-backed warlords in mid-2006.

Despite the deployment of an African Union-led peacekeeping force, remnants of the Islamic group continue to battle government and Ethiopian troops in the capital and other parts of the country. E-mail to a friend

All About United Nations • Somalia