Editor's note: In our Behind the Scenes series, CNN correspondents share their experiences in covering news and analyze the stories behind the events. Here, Anderson Cooper goes to the Congo where he covered the killings of endangered mountain gorillas. 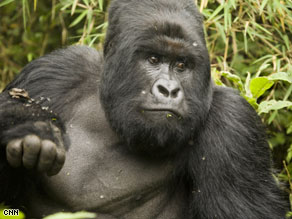 Ten mountain gorillas reportedly have been killed in the Democratic Republic of Congo in the last year.

NEW YORK (CNN) -- You hear them before you actually see them.

Some branches snap just ahead of you. The adult male silverback grunts somewhere off to the side of you. He even pounds his chest. You approach slowly. Mountain gorillas have been used to seeing scientists for decades, but these are wild animals, and you have to be respectful.

When you see them, it is shocking. I've been visiting mountain gorillas since I was 17 -- I've probably been about six or seven times -- but each visit is extraordinary.

They are among our closest animal relatives, and when you stare into their eyes, you see the spark of intelligence. You know these are individuals, with personalities, thoughts and feelings.

Each gorilla group or family is headed by an adult male silverback. They are massive creatures, weighing up to 500 pounds, and are fiercely protective of their brood. Around them baby mountain gorillas tumble and play. They beat their chests just like their father, though the display is far less impressive. If you look closely, you may notice some of the mountain gorillas have lost a hand or a foot. Poachers' snares are a problem, even in a well-protected park in Rwanda I visited.

There are about 700 mountain gorillas left in the world, according to Flora and Fauna International, an organization that acts to conserve threatened species and ecosystems, and they live in a lush forest that straddles Rwanda, Uganda, and the Democratic Republic of Congo.

Watch a close-up view of a mountain gorilla »

In Rwanda and Uganda, where they're well-protected, the mountain gorilla populations are thriving. They are major tourist attractions that bring millions of dollars each year to both countries.

The real problem right now is in the Democratic Republic of Congo. For the last 10 years, there has been fighting in that country, and in the last year, according to the U.N. Educational, Scientific and Cultural Organization (UNESCO) 10 mountain gorillas have been killed, shot to death.

We went to the Congo to find out why those mountain gorillas were murdered. And the answer is we just don't know. Because of the fighting, the mountain gorillas are completely cut off. The rangers who protect them have had to flee the park, and no one's been able to check up on the gorillas.

What we do know, and what is so sad, is that these gentle giants trust us. You see it when you sit with them, when they allow you to come so close. They've been taught that man won't hurt them. This year, in the Congo, the gorillas have been lied to. E-mail to a friend