Beam me up: Just how close are we to teleportation?

LONDON, England (CNN) -- Admit it -- at one point or another we've all dreamed of being able to teleport. How much easier and less stressful life would be if, at the flick of a switch, we could whisk ourselves direct from home to work without the intervening two hours crushed onto public transport, face wedged into the armpit of a man with a sweat gland problem. 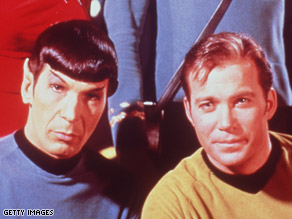 Now teleportation, long a staple of the world of science fiction -- what episode of Star Trek would be complete without Captain Kirk et al "beaming" off the Enterprise onto the surface of some distant planet? -- is being talked of as a serious scientific possibility.

More than just talked of, indeed: over the last couple of years physicists working independently in Austria, Australia and Denmark have all achieved a rudimentary form of teleportation, albeit at the quantum level of atoms and photons rather than the macro level of objects and actual people.

"Now, however, it is known to be possible."

Teleportation -- the term was first coined by American writer and paranormal investigator Charles Fort in his 1931 book "Lo!" -- is defined by the Oxford English Dictionary as: "The instantaneous transportation of persons, etc., across space by advanced technological means."

This idea of transferring an object or person in the blink of an eye from one place to another -- often across vast distances -- has for decades appeared in books and films, from the aforementioned Star Trek "Transporter" to the Portal Keys and Floo Powder of the Harry Potter novels (for a less cheerful take on teleportation check out the 1986 movie The Fly, where the process has a very unpleasant effect on poor old Jeff Goldblum).

It even crops up in Islamic mystical tradition in the concept of Tay al-Ard, or "the folding up of the earth," whereby a person is, without actually moving, miraculously transported to a far-off destination by the world spinning very rapidly beneath their feet.

Sadly for sci-fi enthusiasts the work currently being carried out by scientists is not producing quite the sort of teleportation beloved of popular fiction.

Instead physicists -- spurred on by the theoretical work of Charles H. Bennett and others -- have been focusing on what is known as "quantum teleportation."

A brain-pulpingly complex and, at times, surreal field of study -- one touching upon such knotty issues as the Einstein-Podolsky-Rosen Effect and The Heisenberg Uncertainty Principle -- quantum teleportation involves the transmission not of actual matter, but rather of information.

"This whole area is surrounded by a sort of mystique that makes people feel they can't understand it, "says Bennett.

"In fact it is simpler than it sounds. What you have to note is that in this sort of experiment the atom itself is not teleported, but rather the delicate quantum information contained in the atom.

"In effect you are disembodying the complete quantum state of one atom and reincarnating it in another atom of the same sort."

"This is not teleportation as we like to think of it," she told CNN, "Namely an object disappearing from one place and reappearing in another.

"Rather, it is about the transferring across space of the quantum properties of particles, and in particular their spin.

"One way of imagining it is to think of a snooker table with balls on it. In the traditional view of teleportation a spinning ball will de-materialize at one end of the table and exactly the same ball will re-materialize at the other end.

"In quantum teleportation the spinning ball stays where it is, but its spin is transferred to another ball somewhere else on the table, in effect creating a Doppelganger.

"It is an aspect or a 'property' of the original ball that has been transmitted rather than the ball itself. Although to complicate matters the process of transmission would destroy the original ball."

How is this "quantum teleportation" actually achieved? The process relies upon something called "Quantum Entanglement," a fiendishly counter-intuitive phenomenon that Einstein described as "spukhafte Fernwirkung" or "spooky action at a distance."

Basically it involves two separate particles behaving as if they were essentially one and the same, even though they are separated by a great distance. Changes to one particle will be mirrored in the other.

Using this phenomenon physicists have been able to transfer -- or in effect teleport -- the properties of one particle to another, in the case of atoms over a distance of about half a meter, in the case of photons over tens of kilometers.

While not as overtly exciting or dramatic as the teleportation of an actual person, such quantum teleportation nonetheless has enormous implications for the world of computing both in terms of the amount of information that can be stored and the speed with which it can be moved around.

"Although we are still some way off actually building a quantum computer, the possibilities are extraordinary," says Professor Neil Johnson of the University of Miami's Department of Physics.

"In theory it could contain an almost infinite amount of information, and move that information around at almost the speed of light."

And what of the "classical teleportation" so integral to the adventures of Captain Kirk, Mr. Spock and Harry Potter? Will there ever come a time when actual people, rather than just the particles of which they are made up, will be able to beam from one place to another?

Charles Bennett believes that, in principle at least, it is perfectly feasible to teleport humans without violating any of the fundamental laws of physics. Not only that, but, also in principle, it could be done without resorting to the complexities of quantum entanglement.

"Quantum entanglement is valuable in transmitting particles such as atoms and photons where the most delicate properties are significant and where simple approximation is not enough," he explains.

"Teleporting a person, on the other hand, would not require reproducing the quantum state anything like as exactly.

"Everything we know about biology and how molecules fit together to produce a living being, including the brain, indicates that creating some level of approximation would give you a real person who was a serviceable replica of the original in terms of looking the same and thinking the same thoughts, without necessarily being a perfect quantum replica.

"The teleported person would end up slightly different, but not in a biologically important way."

The implication of this is that you could scan a person using some advanced form of the technology used to perform MRI scans, and transmit that scanned information somewhere else -- using normal electrical or sound signals -- where it would then be reassembled into an approximation of the original.

"It's the same principle as a fax machine," says Bennett. "When you fax something what comes out the other end obviously looks like the original and contains the same information. It's not the same paper, however, or the same type of ink.

"We already have three-dimensional fax machines, so the basic theory is there."

With each human being made up of trillions upon trillions of atoms -- 10 to the power of 28 to be precise -- the technology to perform a sufficiently accurate scan to produce even the most basic approximation of a living person does not exist, and probably never will.

"What might be possible in theory is, from a technological point of view, blatantly impossible," he says.

"If you consider all the atoms in a person, and the fact that in the scan you would have to locate all those atoms to within a nanometer of each other, and then have some machine capable of translating that information into DNA, water, fat, protein etc. -- it's just silly to think about."

Valerie Jamieson is equally pessimistic about human teleportation moving anywhere beyond the realms of theory.

"I really don't think it is ever going to happen," she says. "Then again, one thing I've learnt is never to underestimate the ingenuity of physicists, so never say never."

Would you beam yourself to the other side of the world? Do you think we'll be able to teleport within your lifetime? Share your views and read others' thoughts in the Just Imagine forum.