LONDON, England -- Record prize money of over $17 million will be on offer on the 2008 Ladies European Tour, it has been announced. 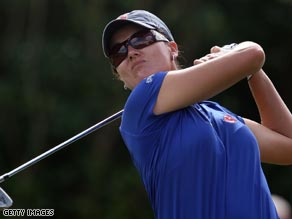 Sweden's Sophie Gustafson came top of the women's Order of Merit this year.

An unprecedented 28 tournaments will include the return of the AIB Irish Open after a four-year absence and four new Tour stops -- the European Cup in Spain, Turkish Open, Hypovereinsbank German Open and Gothenburg Masters.

"The 2007 season has been a huge success -- with the Solheim Cup in Sweden and new events in Australia, Scotland, Madrid, India and Northern Ireland," said executive director Alexandra Armas. "In 2008 we continue to build our schedule."

The inaugural European Ladies Golf Cup at La Sella in Alicante on April 4-6 will have a purse of $430,000 and will feature 24 teams of two players from qualifying countries based on this year's money list and the world rankings.

Once again the season will start with the Womens World Cup of Golf in Sun City, South Africa, on January 18-20 and end with the Dubai Ladies Masters at the Emirates Club on December 11-14. E-mail to a friend