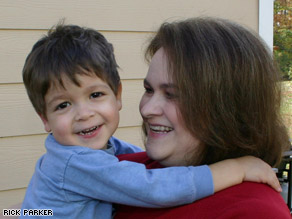 Teddy Parker's mom, Jo, worried that his food allergies were caused by something she'd done during pregnancy.

That was our mantra, repeated for the umpteenth time as my husband and I cleaned up the sticky towels that littered the kitchen after 1-year-old Teddy's first sip of whole milk brought unrelenting projectile vomiting.

The allergy we'd suspected for months was now confirmed.

I felt guilty to my core. My breast milk had to be responsible for his misery. His periodic flares of red splotchy, blotchy, itchy skin were evidence that I just wasn't trying hard enough to cut dairy products from my diet.

At his 15-month doctor's appointment, I mentioned that he'd vomited scrambled eggs -- a new food for him -- that morning. Could this be another allergy?

"Try eggs again in a few days. If he vomits again or gets hives, you'll have your answer," he said. Then he gave Teddy his vaccinations.

Teddy screamed during the 15-minute drive to day care. By the time we got there, he was covered with hives on top of hives. There was not an unscathed spot on his little body.

I rushed him inside, screaming for Benadryl. I pumped the medicine into his mouth, then rushed him back to the pediatrician.

The doctor gave him a shot of epinephrine, and normal skin tone seeped back into his arm, then his chest and legs. The bright red reaction was pushed back.

One of the shots the doctor had given Teddy was flu vaccine, which is egg-based. Teddy had had one before, so the doctor didn't pause over giving him another.

It nearly killed him.

The doctor sent us home after about two hours with a terrifying admonition: "Watch Teddy carefully for the next 24 hours, because at any time, he can stop breathing."

'At least it's not peanuts'


We comforted ourselves again: "At least it's not peanuts." We knew by that time that milk and egg allergies were among the most commonly outgrown.

A pediatric allergist tested Teddy for soy, corn, oats, peanuts and wheat. The little needles put various allergens into his back. A hive indicated a positive reaction. Hives appeared. One was the control histamine, designed to cause a hive. But two others flared as well. I had a lump in my throat as we waited to find out which were positive.

The other was peanuts.

Our last consolation was gone. I was beaten, and I broke down in tears. Was this something I'd done? Was it the C-section? Had I eaten the wrong things during pregnancy? I ate nuts to keep my protein intake up to combat gestational diabetes -- maybe every bite had been dooming my unborn child to a life filled with allergies.

I dug in and educated myself on EpiPens, the emergency shot of epinephrine that will be his constant companion through life. We taught the day-care staff about Teddy's situation, providing photos of him in mid-reaction with a chart on how to handle mild, moderate and severe reactions.

We also had to educate Teddy's older sister, Catie, who had no allergies -- her first sick-kid visit came at age 3. Catie caught on quickly that Teddy couldn't have many things that she could and learned how to alert us to potential cross-contamination problems. "Mommy, I can't hand Teddy his spoon because I've touched bread," she'd say. She immediately dug through her Halloween candy and threw out anything that was not "Teddy-safe."

"Teddy-safe" became a common term in our household. Finding foods without milk, eggs, wheat or nuts has been difficult. We'd get excited over a new food item, only to be deflated by the words "caramel coloring" (which often comes from milk). And who knew a main ingredient in most soy sauces is wheat?

We dumped cow's milk and now have only soy milk in our fridge. We found wheat-free soy sauce. I still remember the grateful tears when I found Soy Garden, a true dairy-free butter substitute that tastes and behaves exactly like butter. Meats, vegetables, hummus, potato chips (only salt for flavoring), Spam and even pork rinds are part of Teddy's diet.

We put labels on food items when they come into the house: "Teddy-safe" or "No Ted." I was on the "Teddy-safe" diet myself, since I breast-fed for 22 months.

There are still slip-ups. One former caregiver mistakenly put whole milk into his sippy cup one day, causing his second-worst reaction ever. After that, we began sending his soy milk in sealed containers. His current day-care providers at first told us they didn't allow outside food. "We're set up to handle special diets," they said. But when I outlined the extent of Teddy's allergies, they suddenly made an exception.

Well-meaning relatives said, "Oh, a little bite of cake won't hurt him" and "Why do you need to read the label -- I'm sure this is OK." But a lapse in vigilance can be deadly.

We have to think before we leave our home. Will we be eating out? Then we bring backup food and use it if the restaurant doesn't pass our quiz about foods and their preparation. We found out that many french fries, for instance, are coated with milk products. The spatula that might be turning a perfectly safe hamburger might have previously touched a cheeseburger. Chuck E. Cheese is out, because of the prevalence of wheat and milk products (and the little fingers that may have spread those products liberally through the facility).

Even the most commonplace childhood crafts have to be modified, since there can be no normal Play-Doh (contains wheat), papier-mache (often uses flour) or macaroni necklaces (wheat).

When we fly, we have to fill out paperwork for a peanut-free flight, since even airborne peanut particles can pose a risk. Once a flight attendant slipped up on a connecting flight and began passing out peanuts. I asked her to please keep them away from our rows. "Oh? Is the peanut allergy still on board?" she asked. Before I could get upset that my son was reduced to a label, she was snatching up the peanuts she'd already given to other passengers.

Further testing has revealed additional allergies to tree nuts (like almonds and Brazil nuts) and cats. More testing will come every six months. We know that keeping Teddy allergen-free is essential to preventing asthma and key to giving him every chance of outgrowing his allergies.

Public school will bring additional challenges, including a federal 504 plan for accommodations under the Americans with Disabilities Act. He'll most likely have a segregated seat at lunch, and while that potential exclusion saddens me, the growing number of children with allergies would seem to indicate he'll have some company in the lunchroom.

I hope that Teddy's classmate's parents won't react negatively to the exclusion of peanut products from the classroom. I've heard parents freak out when told that no peanut butter could come into a classroom. "But it's all he will eat!" one parent said, as if it weren't possible for a child to live for a few hours without peanut butter. If an orange Crayola would kill a child, there would be no question about teaching kids how to mix yellow and red instead, but heaven forbid you ask a kid to wait for a peanut butter snack so someone in his class won't die.

We still have hopes that Teddy will outgrow some of his allergies. After all, he's only 3½. If he can outgrow only one allergy, I hope it is cow's milk. He'd be able to eat the lengthy list of foods whose only allergen is caramel coloring. And I'd like to be able to drink a glass of milk and kiss him on the cheek without him getting a hive.

More than anything else, I hope he won't be "the Epi-pen kid" or "the peanut allergy." I want him to just be funny, mischievous, bright-eyed Teddy.

Jo Parker is a video producer for CNN.com.