Empowered Patient is a regular feature from CNN Medical News correspondent Elizabeth Cohen that helps put you in the driver's seat when it comes to health care. 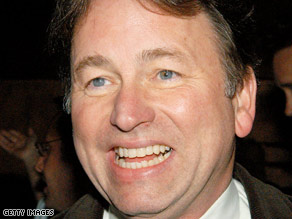 The actor died in 2003 of an aortic dissection -- a tearing of the major artery that comes out of the heart. His widow later settled a wrongful death lawsuit against a California hospital, alleging his condition had been misdiagnosed "at least twice."

Experts who study malpractice cases and autopsy reports say certain diseases are misdiagnosed over and over again. It's worth knowing what they are so you won't be a victim.

1. Aortic dissection: Sometimes aortic dissections are easy to diagnose -- a patient feels a distinct tearing sensation in his or her chest. But other times they're pretty easy to miss because the symptoms could point to other diseases, says Dr. Robert Bonow, past president of the American Heart Association. "Sometimes it feels like heartburn," he says.

2. Cancer: In a Harvard study of malpractice claims in the U.S., cancer was far and away the most misdiagnosed illness, primarily breast and colorectal. Study authors attributed this to doctors failing to stick to cancer screening guidelines.

3. Clogged arteries: Sometimes doctors tell patients they're short of breath because they're out of shape, when it's actually coronary artery disease, says Bonow, who's also the chief of cardiology at Northwestern Medical School.

4. Heart attack: Sound strange? How could a doctor miss a heart attack? Bonow says the big and obvious attack -- the one where someone clutches his or her chest and falls to the floor, the one Bonow calls "the Hollywood heart attack" -- isn't always so clear. Sometimes the only signs of a heart attack are a sense of fullness in the chest, nausea and a general sense of not feeling well.

5. Infection: In the Harvard study, infection followed cancer as the most misdiagnosed condition.

So how can you keep yourself from becoming a victim of misdiagnosis?

Actually, Nancy Keelan says, demand more tests. For more than three years, Keelan says, she complained to her gynecologist about irregular, heavy bleeding, and for three years he told her she was entering menopause and not to worry. Keelan says it turned out she had both advanced endometrial and ovarian cancer. "I believe he missed my diagnosis five times," says Keelan, who was 46 when she got her correct diagnosis.

Keelan, a registered nurse, now speaks to women's groups, telling them not to let more than three weeks go by if they're having new, strange symptoms. She says if the doctor tells you it's no big deal, you can frame your request this way: Tell your doctor you know it might be nothing, but would it do any harm to have a simple test? She says a simple ultrasound, would have caught her cancer much earlier.

Let's say you've been experiencing shortness of breath when you exercise, and your doctor tells you you're just out of shape. You can ask your doctor if it could possibly be something more dangerous. Dr. Mark Graber, chief of medicine at the Veteran's Administration in Northpoint, New York, says the single most common cause of misdiagnosis is a doctor's failure to consider other possibilities after an initial diagnosis is reached. "It's called premature closing -- the minute they come up with a diagnosis, they don't think about a better solution," he says.

Another source of misdiagnosis: Lab results get lost or forgotten. A study by Dr. Tejal Gandhi at Harvard Medical School found that up to 33 percent of physicians did not always notify patients about abnormal test results. "No news is not good news," says Dr. Saul Weingart, vice president for patient safety at Dana Farber Cancer Institute. "It might be that the report fell down behind someone's desk."

4. Assume your doctors don't talk to one another

Our experts said doctors often don't share information about test results. One piece of advice: Use that conference call function on your cell phone. Make phone appointments with your doctors at the same time, and then conference them all together.

5. Be wary when your doctors work in shifts

The title of Gandhi's 2005 study in the Annals of Internal Medicine says it all: "Fumbled Handoffs: One Dropped Ball after Another." In it, she describes how a hospital patient's tuberculosis was misdiagnosed partly because test results weren't passed on when doctors changed shifts.

All About Cancer • Heart Attacks